March 12, 2020
So this school year, I decided that I wanted to be more involved in school activities, and I had decided to join the robotics team, as invited by another team member. I talked to the coach and was informed of the pre-season meeting date. I pretty much went into robotics blinded, having no idea what I was doing. Although I knew I came in knowing I wanted to be a programmer, that soon changed. 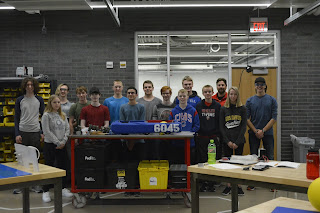 A few pre-season meetings commenced, and then it was already the first practice. It was very evident that we had a lot of new programmers, and our lead programmer was more involved at first, but then I found myself mentoring the new ones after the first few weeks. Now keeping in mind that Java is not an easy language to learn, and I understand the struggles students may face jumping right into it with no prior programming experience. Doing as un-suggested by a coach, we started them on Codecademy and one-to-one sessions. The lead programmer would do more of the complex topics, while I would help answer simple questions and reword things and break down more complex topics. Some weeks, our lead programmer would be gone, and I would find myself having to explain most things myself, which I did not mind. As the season had progressed, more and more kids started branching out away from programming to the other sub-teams. Very quickly, it was just us three, the main programmers.

Many weeks went by with no programming because, in reality, the robot had to be designed, tested, and built first before any real programming could happen. So I found myself doing other tasks. I helped out with putting the team number on shirts from the school coffee shop, I managed the team Twitter, did some outreach work and got us a sponsor, and I did some more organizational work. During the end of the season, I had worked on the bill of materials and some other prerequisites for our Duluth Regional. I guess you could say I can do just about any task on the robotics team, give or take a few. By doing all these tasks and having multiple roles, I really learned my true strengths and weaknesses, working with a team of people. By the last practice, I had learned the following about myself and made the following discoveries:
With all of the things I had learned, I tried to bring them to the Duluth Regional that we competed at. I went in blind to this, knowing nothing about the structure of competitions, and how they work. Quickly, I had learned the run down and how things work. I had to make so many runs to the pit, back to the stands, going to the field, and other laborious tasks. I knew that all my efforts were hopefully, contributing to the team. Being 1/15 in the team, even the smallest things were accounted for through the tasks I did.

During the regional, there were some things I learned to like, though hated at first:
Though I may have missed some things in this article, I had definitely learned a lot during the 2020 robotics season, learning the things I liked, the things I didn't, and had developed essential professional skills and picked up some new talents. Working with new people, and making new connections was a great experience for me and I learned so much! I will definitely join robotics next year.

*This article was written at 12:30 AM, so I'm promising you that the grammar and wording are not perfect. Corrections are always welcome!

Popular posts from this blog

January 09, 2019
It all started when I applied for a free ADS-B receiver through Plane Finder, a UK based company that provides real-time flight tracking and statistics. Ever wonder how Plane Finder works? Planes flying overhead send ADS-B signals from takeoff to landing, containing various flight parameters such as speed, altitude, heading and barometric pressure. Receivers on the ground pick up these signals, decode the raw packets, and send them to various flight tracking providers such as Plane Finder, FlightAware, and FlightRadar24. This all happens in real time. But there’s one problem: there are not many receivers around to pick up all the signals from a whole flight, leading to gaps in the information. This is why Plane Finder sent me an ADS-B receiver for better coverage in the St. Cloud Minnesota Area. It took about 3 weeks from first email to shipment. It then took another week to plan and get installed. My thoughts on it? It work’s pretty great. Last night I messaged the St. Cloud Airport …
Post a Comment
Read more

July 29, 2019
Well, the time has finally come. CareerONE ended last Thursday (July 25th). It was a pleasure to be apart of a group of like-minded youth, aiming for the same goal, success. I am proud to proclaim that I have completed CareerONE at 100% and earned a full stipend of $1,020. What is CareerONE you may ask? It is a summer program for youth aged 14 to 17, which provides and trains teens with the necessary skills employers look for, as well as life skills. Some of these include FDIC Money Smart, Youth@Work Talking Safety, ACT KeyTrain, a program that helps students to not regress during the summer months, and other necessary skills such as following a dress code, showing up on time, being respectful, being productive, and producing quality work. Most importantly, how to write a resume, fill out a job application, and how to interview properly. Thanks to CentraCare Health, approximately 120 youth were able to experience a mock interview with positive feedback and minor critiquing, so that th…
Post a Comment
Read more